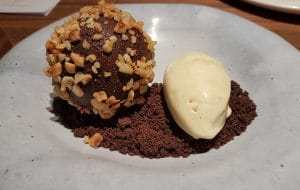 Yesterday, I was lucky enough to be invited to lunch at Bouche on Bridge. I’m not sure what to rave about first, the food or the service, as both were outstanding. Amazingly, the restaurant opened just 8 weeks ago, but I couldn’t tell as it runs so smoothly already. I put this, in part, down to the staff they have carefully selected, such as Alex the Floor Manager.

Bouche (French for mouth, in case you are wondering) is joint owned by Emma and Harry. Harry, also the Executive Chef, has worked in many Michelin-starred restaurants throughout Europe, as well as three-hatted Marque and Rockpool 1989 in Sydney. Their passion for good quality food in an unpretentious environment really shines through. Despite a French name, the food is not French as such; more Modern European with a Modern British twist (as Harry is from Portsmouth in the UK).

Speaking of the food…we shared a few of their dishes including the Oysters with Blood Orange and Wakame; Bug with Fennel, Lemon and Brioche; NZ Gurnard with Spring Peas and Mint; Chicken with Hay, Salsa Verde and Capers; Butchers cut of Beef with Horseradish and Sorrel Puree, Handcut Chips; Nectarine with Sorrel and Honeycomb and Hazelnut with Chocolate and Malt (or as I like to call it, a Giant Ferrero Rocher on steroids). All of the food was delicious, but my favourites were the bugs which reminded me of the Yabbies dish with lemon jam at Bennelong (but better)!, the beef (it really does melt in your mouth) and the Giant Ferrero Rocher on steroids (the picture above says it all really).

You can’t go wrong with any of the dishes. All of the produce is seasonal and sourced in Australia, such as pork and vegetables from the Blue Mountains and cider and truffles from Tasmania. They only use produce from overseas (such as New Zealand) if it is not in season here or, for example, if their suppliers have told them that this week Australian fish is not that good.

In addition to the restaurant, they also have a great bar downstairs, which serves snacks and is open 6 days a week from 4pm. It is perfect for a drink after work or before dinner, and can also be hired out for private functions.

My favourite part of this incredible venue though is the Chef’s Table. It seats 6 comfortably or 8 if you don’t mind getting cosy. They will also reserve the whole area for smaller groups, so it’s perfect for a romantic dinner for 2. You can still order from the a la carte menu at this table, of if you want to make it really special, they can design a degustation menu just for you.

To be honest, it is hard to do this restaurant justice with just words. You really should check it out for yourself. If you mention that you found out Bouche through Sydney Concierge, Emma, Harry and the team will certainly look after you. And if you book through us, you will receive a complimentary dessert or glass of champagne.

This is definitely one to watch, and if it doesn’t receive at least 2 hats in the SMH Good Food Awards next year, I’ll eat my hat. Or maybe I’ll just eat another Giant Ferrero Rocher instead.