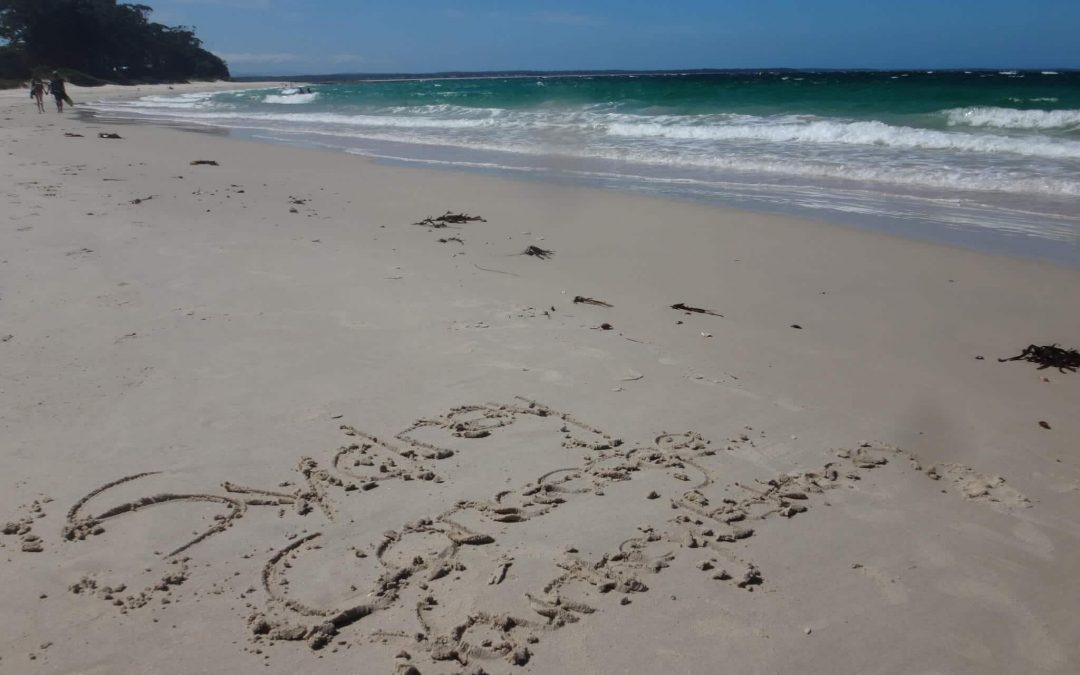 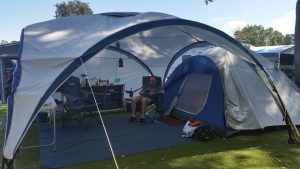 Yesterday, we got home from 4 relaxing days on the South Coast. We left Thursday morning and drove straight to our campsite in Huskisson. White Sands Holiday Park is perfectly located; it is just a 10-minute walk to Huskisson shops and cafes, but it feels a million miles from anywhere. It has a camp kitchen, public barbecues, powered sites, cabins if you don’t fancy camping and a small children’s playground. There is no swimming pool, but it is right on the beach. Unfortunately, there are not many views of the ocean from the site, due to the trees along the foreshore, but there is a wonderful coastal breeze and plenty of paths down to Huskisson beach. It is a great spot, but having to remember the security code for the amenity blocks took me a couple of days to get used to. 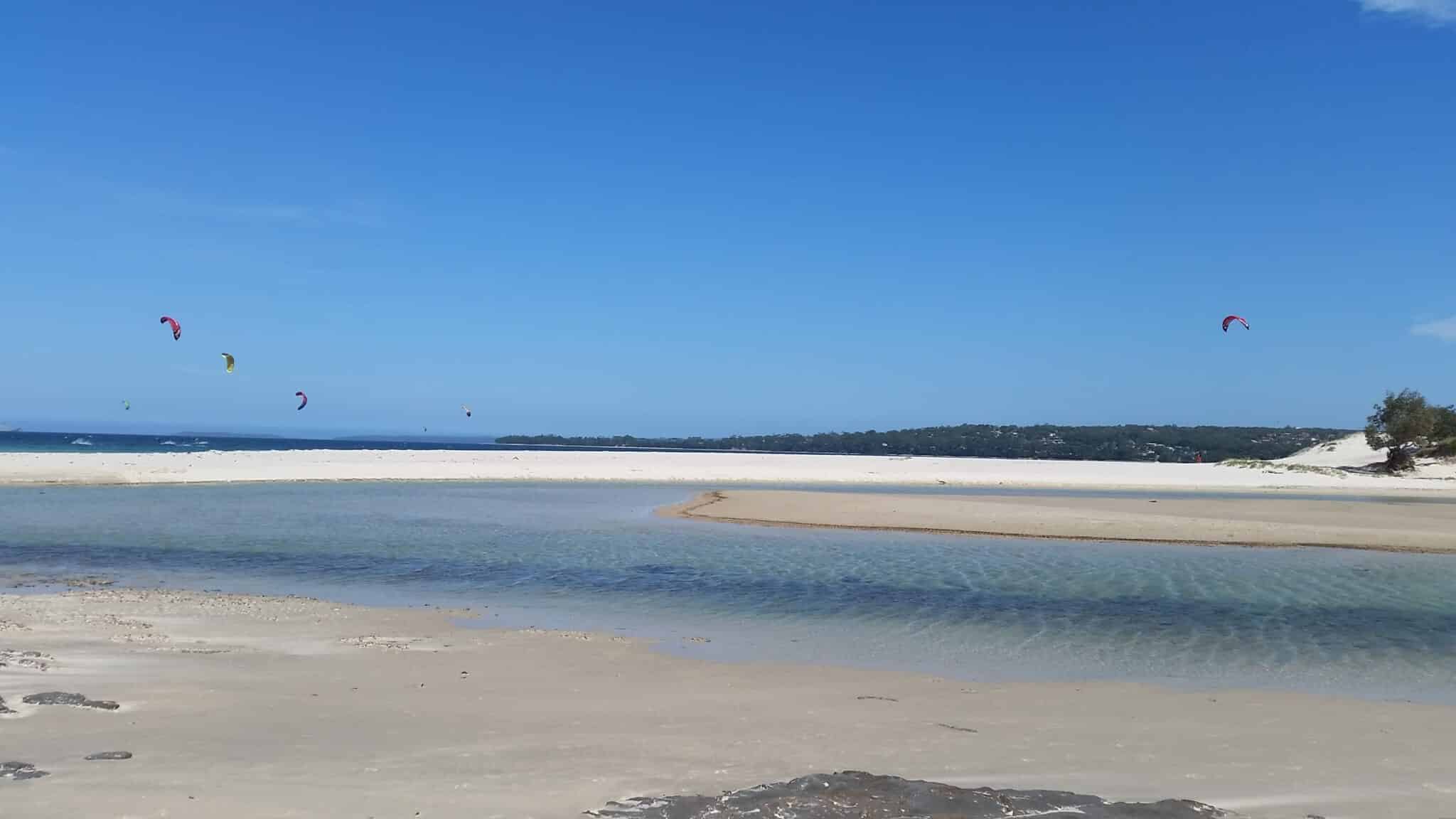 After putting up our tent, gazebo and camp kitchen, we drove down the road to Moona Moona Creek for a well deserved and much needed (it was about 32c) swim. It’s the perfect spot if you have children, dogs or don’t like swimming in waves. At low tide, there is so much soft, sand and at high tide it’s perfect for kayaking. The water is so sheltered, shallow and clear, that you won’t want to leave. There is even a playground, toilet block and public barbeque. And on the windy day we visited, there were lots of kite surfers.

After freshening up, we drove to Club Husky, where we had dinner in their Chinese restaurant (nothing to write home about) and won a meat tray which would keep up going for a week. Club Husky has meat raffles every Thursday (they sell tickets from 6pm and draw them from 7pm). After a couple of drinks back at the campsite, and in preparation for the birds waking us up at some ungodly hour, we had an early night.

After rising earlyish, we had a leisurely morning, before wandering down to Huskisson wharf to join the Jervis Bay Wild Summer Eco Cruise. We had initially booked the Sunset Cruise for last night, but they had cancelled this due to us being the only two people booked on it. Luckily, they upgraded us to the Eco Cruise, despite it normally costing $40pp extra. At first I thought, it would be 2 or so hours of just cruising Jervis Bay and relaxing on the boat. I was a little worried, to be honest, that I would get bored of looking at beautiful beaches and rocky headlands after all, but there is a surprising amount to see in Jervis Bay (it is 3.5 times the size of Sydney Harbour after all). Highlights included: the boom netting, Honeymoon Bay (pictured), The Docks (a natural formation) and Point Perpendicular. We saw several dolphins from a distance, but sadly they all seemed to disappear once we got close. NB – Jervis Bay Wild do a specific dolphin cruise, which goes where the dolphins go if you really want to see them. There are about 90 living in Jervis Bay though, so the odds on any of their cruises is quite high.  If you book the Eco Cruise, bear in mind that it says it lasts 2 hours, but ours lasted 2.5 hours, so I would advise that you don’t book anything straight after.

We were hoping to hire a kayak from Jervis Bay Wild after the cruise, but they informed us that the tide was too low, so we grabbed a pie at the bakery and then went for swim at the beach next to our campsite (which was a bit choppier than Moona Moona, so is perfect if you like boogie boarding or jumping the waves). After a bike ride along the coastline towards Vincentia and a barbecue dinner, we jumped back in the car and headed to Milton Show. 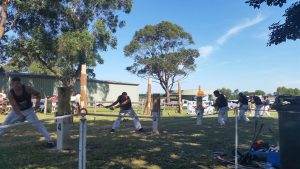 We had already booked an Airbnb room in Milton for Saturday night, but then we found out that they had swapped the Rodeo from Saturday to Friday night, so we decided to drive there anyway. Milton Show is like a much smaller version of the Royal Sydney Easter Show, and probably all of the exhibitors we saw in Milton will be at the Sydney show in a couple of weeks. It was the first time I have been to a country show, and I have to say, that despite moving to Australia 10 years ago, I feel like a real Australian now. It was an experience, but not all good though. The Rodeo was different to the one I had seen at Tamworth Country Music Festival a few years ago, and Milton’s Rodeo simply consisted on locals trying to stay on the back of the bucking cow/bull as long as possible. I was horrified to see that this included boys from just age 7! Admittedly, their cows were smaller, but not small enough in my opinion. Two boys did not get back up off the ground for ages, and one was even taken to hospital in an ambulance! I hope he is okay? I guess they really do do things different in the country. 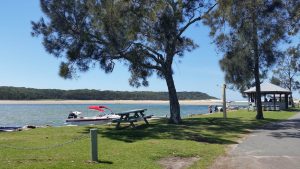 The next morning, we packed up our campsite, had breakfast in Husky (at Angels Bayside – the food was dry and the service was ridiculously slow! Five Little Pigs, from a previous trip, is much better) and drove back to Milton via the gorgeous Lake Conjola (I have already decided this is where we will go camping next, it’s perfect). Our Airbnb host had had to go to work, so she had left the spare key in a secure place, texted us its whereabouts and told us to make ourselves at home. After checking out her quirky, historic (1850s) home, we went back to the Milton Show to check out the wood chopping competition, grand parade and various equestrian events.

It was far too hot though, so we drove to Mollymook Beach for a quick swim and a bite to eat at the newly opened Rooftop Pool & Grill at Bannisters Pavillions. The Rooftop Pool & Grill is open to in-house guests and the public from 12pm daily, though the pool deck and suspended pool was only open to in-house guests when we visited. There are plenty of seating options in the public area, including double hanging chairs, but we chose to sit at the bar. We shared the Crispy Calamari with lime aioli, the Shoestring French fries, Bruschetta with pea, mint, buffalo mozzarella and the Chocolate tart with salted caramel gel and vanilla bean ice cream. The food arrived quickly, yet tasted fresh and delicious. The dessert was very rich, but luckily I have an extremely sweet tooth, so enjoyed it immensely. 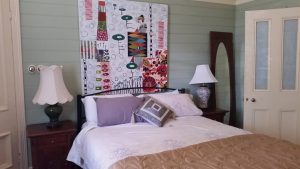 We made the short drive back to Milton, to meet our Airbnb host, Frances. As you would expect from an Airbnb host, she was extremely friendly and helpful. She gave us some tips on where to go for dinner, but we were still full from Bannisters, so we just had a couple of drinks at the local pub instead. The next morning, Frances provided a continental breakfast (croissants, yoghurt, toast and jam, cereals, tea, coffee and juice). I don’t normally eat breakfast first thing, but couldn’t say no to the croissant and coffee. After checking out Milton, we had a more substantial breakfast and made the 3-hour drive back to Sydney.

In summary, the weekend was everything we could ever want. Normally it rains when we go camping, but you could not fault the weather this time at all. The South Coast really does have it all and its the perfect distance for a short break from Sydney.