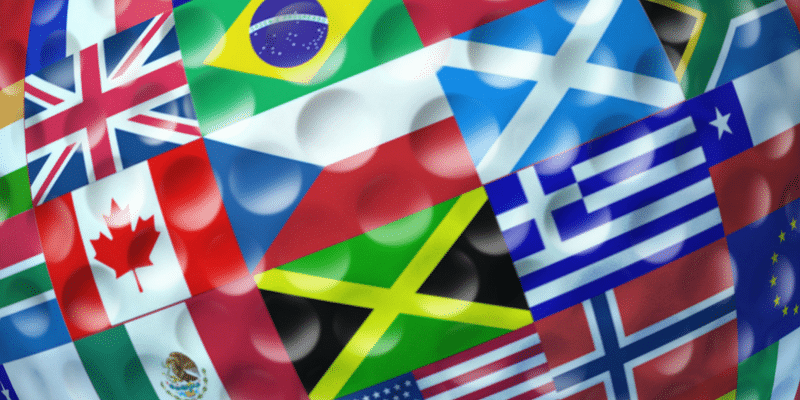 Until 1788, that is just 229 years ago, the only inhabitants in Australia were aborigines. Then the English invaded Australia and brought many of their convicts here, as well as some free settlers to help establish the community. They were mostly British and Irish migrants at this stage. The Gold Rush (from 1851) and World World II brought many Europeans and Chinese to Australia. Then there was the Ten Pound Pom policy from 1945 to the 1970s, where for just £10 (it was subsidised by the Australian and British governments), people from the UK, Ireland, Malta and Cyprus were able to migrate to Australia. Since 1945, more than 7 million people have settled in Australia. From the late 1970s, there was a significant increase in immigration from Asian and other non-European countries.

The definition of ‘multicultural’ is “relating to or containing several cultural or ethnic groups within a society” (Dictionary.com). Hence Australia has been a multicultural country for the last 166 years. The Australian government states that “almost a quarter of us were born overseas, and four million Australians speak a language other than English.” Despite this, the majority of Australians born overseas were born in an English-speaking country with a similar culture to Australia; namely the UK (5.1%) and New Zealand (2.6%).

What is the Australian identity?

This is incredibly hard to define, especially due to its history mentioned in brief above. Also, the Australian identity of the 1950s, for example, would be very different to the Australian identity today. And of course, migrants to Australia over the last 2 centuries or so have contributed significantly to Australian life and therefore influenced our identity. Australia is a country obsessed with coffee (thank you Italy), who loves yum cha on weekends (thank you China), having a drink with friends at the pub (thank you UK) and celebrating St Patricks Day (thank you Ireland).

Of course not is the simple answer. The long answer is so much more complicated of course, but I will try here to explain our point of view at Sydney Concierge.

When Australians complain that multiculturalism is destroying our Australian identity, what they often mean is that migrants are not assimilating into Australian society and that we are having to change our values to adapt to theirs. One recent example was the rumour spreading like wildfire that Cadburys had deleted the word ‘Easter’ from their Easter Eggs, causing an outcry that political correctness had gone too far. Cadbury Australia told news.com.au that “Easter is still stated on our Easter eggs on the back of packs. Most of our Easter eggs don’t say Easter or egg on the front because it is very obvious through the packaging that it is an Easter egg, re-emphasised by their seasonal availability.” Despite this reassurance, many people were still not happy. Personally, as a business owner, I see nothing wrong in selling Hunting Eggs, targeted at people who do not celebrate Easter, as it is simply broadening your market. But it would be nice to see some proudly named Easter Eggs too, so everyone is covered. It will be interesting to see if Cadburys print Easter on the front or the back of their packs next year.

There are different degrees of assimilation. Should someone who moves to Australia use the same lingo? Should they support Australia above every other sporting team? Should they enjoy the same sense of humour? How far should they go? After I had been living in Australia for a couple of years, an Australian colleague told me that I should support the Wallabies in the rugby and Australia in the Ashes. The colleague in question was about to move to England himself, so I asked who he would support when he lived there and amazingly, he replied “Australia of course. It’s my home”. The irony was lost on him.

I have now lived here for 11 years and Australia will always be my second team, but having lived in England for more than 3/4 of my life, they still get the numero spot. Perhaps it will change when I have lived here longer? I also still say soccer, flip flops and crisps. Occasionally, I say doona instead of duvet cover though. I am not trying to be awkward, but old habits die hard and mostly it is a subconscious thing.

It took me around 2 years to feel ‘settled’ in Sydney. Moving to the other side of the world is hard, especially when your family still live in the UK and you didn’t know anyone when you arrived. And I can’t help but wonder, if it is hard for an Englishperson, whose first language is the same and whose culture and sense of humour is similar to an Australian, how hard is it for someone whose first language is not English and whose culture/religion is completely different? Add to the mix racial discrimination and worse, and you have a group of people who have not fully assimilated into Australian society and adopted all of our ‘values’. Do they need to adopt all of them though? And would an Australian moving to another country, such as France or Oman, adopt all of their values?

Additionally, I chose to move 17,000km around the world and had been to Australia on three extended visits before I emigrated. Many people, often those that are being accused of not assimilating, have never set foot in Australia before they are forced to come here, as they flee war and devastation. They did not choose to come here like I did. They simply chose to survive. They chose not to be raped, tortured or murdered. They chose a better life for their children. As Trainspotting would say, “they chose life”.

Additionally, unless you have moved to Australia from overseas or moved to another country from Australia, it is hard to understand, but arriving in a new country is incredibly daunting, no matter your circumstances. Of course, as mentioned above, my circumstances made it less daunting than someone else who did not speak English before they got here and didn’t have a family friend they could stay with until they got settled and found a job (thank you, Sue). It is still hard though, especially if you migrate alone. And in these circumstances, it is completely natural to gravitate to other people like yourself. For the first few years, I lived in Australia, the majority of my friends were British and Irish. I didn’t seek out these people on purpose, it just kind of happens. You know someone from ‘home’, who knows someone from ‘home’ etc. In addition, we subconsciously seek out others who are going through the same process. InterNations has some useful tips on how to go from ‘newbie to native’, in this blog post.

A couple of months ago the federal government announced that the Australian Citizenship test would change to ensure that all new immigrants adopted “Australian values”. According to the ABC, “applicants will be asked to demonstrate that they respect women and have integrated into Australian society, for example by joining clubs or by providing evidence that they are employed and their children are in school.” The jobs and school part are common sense, but what about people born here who have not joined a club, does that mean they don’t demonstrate Australian values? And what about people born here who convicted of domestic violence, does that mean they should be deported?

I believe that if an immigrant to Australia works in customer service or with the public in any way, they need to be able to speak fluent English, to do their job efficiently. However, do they need to join an RSL, walk the Kokoda Track, eat meat pies with tomato sauce and vegemite sandwiches, enjoy watching cricket and speak English at home all of the time? No. Many Australians born here will not even do all of that.

If you do not take assimilation and values to this extreme, then most migrants and refugees do assimilate into Australian culture. Many will become doctors and save people’s lives, successful human rights lawyers, scientists who find cures for disease, award-winning chefs…I could go on.  A couple have even become Prime Ministers! After Peter Dutton’s (Minister for Immigration and Border Protection) inaccurate remarks that “Illiterate and innumerate refugees would languish in unemployment queues and on Medicare and the rest of it “, this campaign showed just how wrong he was. Of course, there will always be a few (the minority) who do not even attempt to assimilate of course. It is these people that the media fixate on, as sadly controversy sells more papers. The media also forget to mention that these people can be found all over the world, of all colours and religions. Some will be Caucasian Australians.

And let us not forget the benefits of multiculturalism. Where would we be without all of the amazing restaurants in Sydney, with chefs and food from every corner of the globe? Before I moved to Sydney, I lived in London for about 6 years; another great multicultural city. One the reasons they are both such great cities is their cultural and culinary diversity. I remember on a trip to Paris about 10 years ago being shocked that about 90% of restaurants sold French food. Sure there were fast-food joints like McDonald’s and a couple of Chinese takeaways, but where were the restaurants from Ethiopia, Brazil, India, Thailand, Spain etc? Perhaps they were hidden in the suburbs, but in London and Sydney, they are everywhere, so I found it very strange. I am not sure if this has changed in the last decade or so, but let’s hope so. Variety is the spice of life after all!

I have also worked in jobs in Sydney (and London) where speaking a foreign language was necessary for at least three-quarter of the staff. And sadly, like the British, most Australians only speak English. So until we have enough Australians who can speak fluent Cantonese, Mandarin, Arabic, French, Spanish, Malay, Italian, Japanese, Hindi and more, these migrants are essential for Australia’s success on the global stage.

The grass is greener where you water it

Another wise person (thank you Julia Bickerstaff) recently said “the grass is greener where you water it”. I love this! In this context, it makes sense that the more effort you put into your new country, the more you try to assimilate and the less you think that your home country is greener, the happier you will be living in Sydney. However, there is a vicious circle, in that if a new migrant is discriminated against or racially abused, they will miss ‘home’ more and be reluctant to assimilate. And the more reluctant they are to assimilate, the more they will be abused and discriminated against.

So what is the solution? Sadly, I don’t have all the answers to that multi-million dollar question. It is the question that governments around the world are all asking right now. But in the meantime, I believe we should in the words of Ariana Grande “come closer together, to help each other, to love more, to sing louder and to live more kindly and generously than we did before.”

We would love to know what you think? Is multiculturalism destroying our Australian identity? Or is it simply redefining it? Do you love how multicultural Sydney is? Or do you wish we could turn the clocks back 40 years? Do you have any useful tips on how migrants can integrate into Australian society? If you have moved to Sydney from overseas, what have your experiences been like? Did you find it hard to settle here? Please let us know your thoughts in the box below.