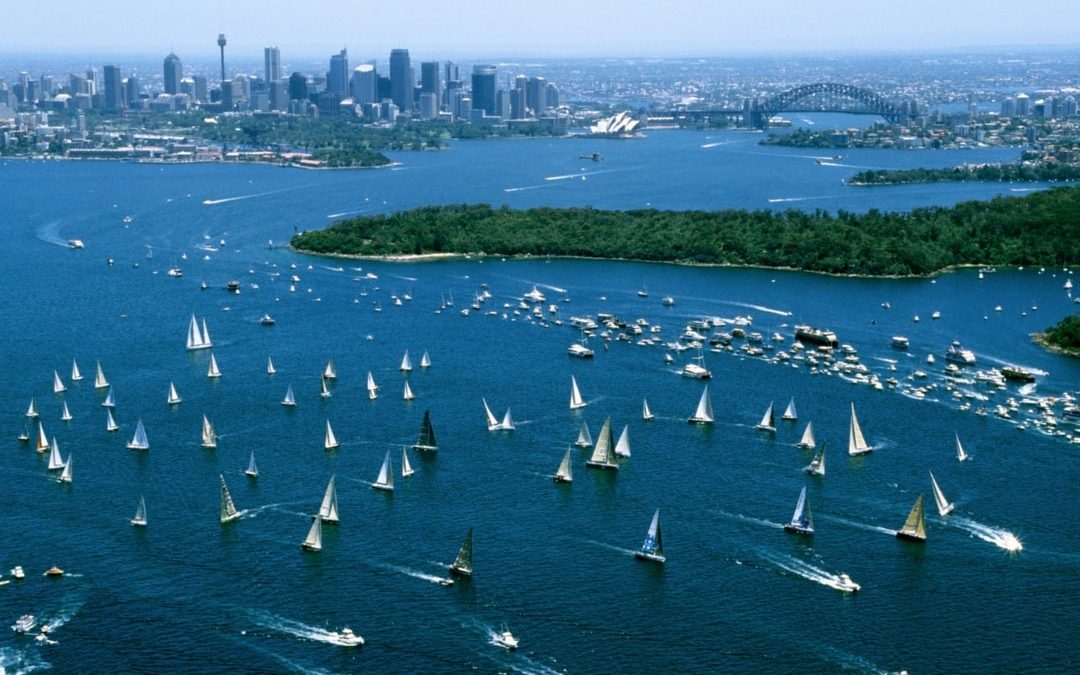 (As mentioned in an earlier blog post, I would rather live in London than Melbourne…or any other city in Australia for that matter. When I moved from the UK in 2006, I chose to live in Sydney, which just happens to be in Australia. Don’t get me wrong, I love Australia and am lucky enough to have explored most of it, certainly more than the average Australian, but I would not have moved half way round the planet by myself, left all my friends and family and uprooted my life to live in any other city but Sydney. I am not the only one to feel like this. Elizabeth Farrelly said in SMH “From the moment I first set eyes on Sydney, I was gone” (SMH).

So…where did my passion for Sydney come from? Funnily enough, it all started with Melbourne. I had a normal upbringing in a small town in the centre of England called Ashby-de-la-Zouch. This may seem insignificant to our story, but Ashby just happens to be only 7 miles from the original Melbourne in Derbyshire. Melbourne, Australia, was named in 1837 after the British Prime Minister at the time, William Lamb the 2nd Viscount Melbourne, whose seat was Melbourne Hall in Melbourne, Derbyshire.

As a young child, I thought (or at least wished) that if I went to Melbourne, Derbyshire, and clicked my shoes together (even if they weren’t red sparkling ones), I could magically be transported from one Melbourne to another. One reason I wanted to visit Melbourne, Australia, so badly was to visit my aunt, uncle and cousins who moved there as Ten Pound Poms, 8 months before I was born. Throughout my childhood, they would often post my siblings & me souvenirs of Melbourne and of Australia. Thanks to these frequent reminders of a world far from Ashby-de-la-Zouch, some people described me as obsessed with Australia, even at a young age. At school, we had to do a project about an island, I chose Australia. Later, we had to do a project about a country, I chose Australia. And not for the reason most children would choose the same subject, to do less work. I simply wanted to do more research on Australia.

Then, as a teenager, we started to have frequent summer holidays in Tenby, South Wales. My Dad and I would go out for a sail in the dinghy, and I would ask if he could sail us from South Wales to New South Wales.  I don’t recall my dad’s reply, but am guessing it was something along the lines of “not today darling”. I even dreamt about digging a tunnel through the centre of the earth! Even back then, I was determined to get here. It took me a bit longer than I thought though.

In April 1995, my mum visited her sister in Melbourne, Australia, and I was tempted to spend my savings and go with her. However, I had my university finals looming just 2 months later, so common sense prevailed. I decided instead to save more money, get a working holiday visa for Australia and spend longer travelling around Australia. I departed Heathrow on 5 November 1996, as the Guy Fawkes fireworks lit up the London night sky. This exciting start to my first trip to Australia certainly set the scene. After a 3-day stopover in Hong Kong, I arrived in Melbourne and spent 4 happy months getting to know my relatives and exploring Victoria.

I enjoyed my time in Melbourne, but on 28 February 1997, I took an overnight bus to Sydney, got a taxi to a guesthouse in Cremorne Point, quickly showered, and walked down the road to catch a ferry to city. And my heart stopped. There, in front of me, in all its glory, was Sydney Harbour. As Bill Bryon says in his book Down Under, it is “unquestionably the loveliest harbour in the world.” The Harbour, or Port Jackson as is officially known, is only 16 miles long but thanks to all its nooks and crannies, there are 152 miles of picture-perfect harbour coastline. It feels strange to say this now, 20 years later, but I felt like I had ‘come home’.

After getting to the ferry to Circular Quay, where I had to pinch myself continuously, I had a quick look at the Opera House (I even signed a petition against The Toaster, which in hindsight, isn’t that bad), but I did not have time to dilly dally. I was on a mission. I headed south to Hyde Park and then followed the crowds. I bought 2 milk crates, made a few new friends and watched the 19th Mardi Gras Parade. This event, even to this day (and I have been several times since), personifies Sydney in so many ways for me. For the most part, it is vibrant, full of life, loud, proud, and popular with heterosexuals and homosexuals equally. I had a ball, despite not knowing where I was. I had simply followed the crowds. I found out later, I was on Oxford Street in Paddington. You don’t get much better introductions to Sydney than this!

I stayed in Sydney for a few months, working as a nanny to a lovely 4-year-old boy, before travelling up the East Coast once Sydney got a little chilly. I knew by the time I headed back to Sydney in September 1997 that I wanted to stay here. Forever. Sadly, my 1-year working holiday visa was about to run out, my round the world flight ticket was only valid for one year and I had won a 2-week trip round New Zealand, so I reluctantly left.

Going back to the UK via NZ and LA wasn’t all bad. It was great to see family and friends again, get my wardrobe back (there is only so long you can live out of a backpack) and meet up with other English friends that I had met in Australia. Then real life hit and I had to get a job. I got a job as a Market Research Assistant in Buckinghamshire and this was fine for a while. After about 2 years, the novelty of a stable income and living just an hour by train from London had worn off and my feet were getting itchy. Itchy for Sydney specifically.

It was July 1999 and an English friend of mine was going to Sydney for the Millennium. This was, of course, a huge event worldwide. Do you remember the rumours about the world ending? And about computers exploding as they were not built to deal with dates starting with 20. It seems ridiculous now. Sydney’s New Year’s Eve 1999/2000 fireworks promised to one of the biggest events the world had ever seen; especially as they were preparing to host the Olympics 9 months later. Around this time, I went to a friend’s hen weekend in Newcastle, England. We danced the night away on Tuxedo Princess, a nightclub on a boat which was famous for its revolving dancefloor. For me though, what stood out was the view from the top deck. The boat was moored beneath the Tyne Bridge, which was designed by Mott, Hay and Anderson. They also designed the Sydney Harbour Bridge, hence the uncanny resemblance. Looking at the Tyne Bridge made me homesick for Sydney, so I decided there and then that I would go back to Sydney, not only for the Millennium but also to try and find a job.

On Monday morning, I contacted a few agencies in Sydney, who said they would arrange interviews with companies who would potentially sponsor me. They were true to their word, but unfortunately, they forgot to tell the companies that I was on a 6-month tourist visa, as I had already used my one and only Working Holiday Visa. It felt like the world had ended when I realised my dreams would not be coming true; not yet anyway. I dusted myself off, enjoyed the Sydney summer with newfound friends (to this day, we are still best friends), travelled around Australia some more and then flew to New Zealand for a one-year Working Holiday Visa there.

After just 3 months working in Christchurch, I spontaneously decided to go back to Sydney for the Olympics. This was by far one of the best decisions of my life. Sydneysiders are generally a pretty friendly bunch, but never more so than from 15 September to 1 October 2000! The Games received near-universal acclaim. In preparing for the 2012 Olympic Games in London, Coe declared the Sydney Games the “benchmark for the spirit of the Games, unquestionably“. I loved them so much that I attended the next 3 Olympics in Athens, Beijing and London. Attending Sydney’s Olympics was bittersweet for me though, as leaving again was so hard. Travelling around the North Island of New Zealand with my cousin did soften the blow somewhat though, as did the stopovers in San Francisco and New York on the way back to England.

Back to real life again. And this time I got a job in the big smoke, London. Pretty quickly, I came to love London…almost as much as Sydney. The weather didn’t help much, but being near family and friends, the shopping and theatre, certainly did. During my time there (January 2001 until April 2006) I would go to the Down Under Live and Working International Expos at least once a year, to check how many points were needed to emigrate, how many I had, and live the dream for just a few hours.

I don’t recall exactly what made New Year’s Eve 2004 different to all the others, but this time I not only made the resolution to move to Sydney, I downloaded the form for a Subclass 139 Skilled – Designated Area Sponsored Visa. It took another 378 days to receive my Permanent Residents visa for Australia, and I was paranoid for most of that time that they would find a reason to reject my application. At the start of January 2006, I knew it was imminent though and eagerly checked the post every day. For almost 2 weeks there was nothing, and then on one obscure Thursday evening (12 January in London, Friday 13 in Sydney – it turns out they are lucky for some), an email arrived from my immigration agent, Ms Nettle. I still have the email! It simply says “Dear Ms Roberts, I am writing in regard to your application for an Australian Skilled Migration visa. I am pleased to advise that the application has been approved and the permanent residence visa was granted on 12 January 2006”. To say I was in shock was an understatement. I’m pretty sure I cried.

Just over 3 months later, on 17 April, I flew to Sydney, again. This was my first one-way ticket though. I landed the next day and went straight to a friend’s mum’s house in Leichhardt (proof that life works in circles, as I am living in Leichhardt again). Thank you, Sue! I had never met Sue before, but she had very generously offered to let me stay until I had found a job and somewhere to live. After a few weeks living there, I moved to the Eastern Suburbs where I happily lived for about 8 years, until last year when I moved in with my partner, back in the Inner West.

The last two decades have been a rollercoaster, but along the way, I have seen Sydney as a backpacker, a tourist, a fresh off the boat immigrant, a true-blue Sydneysider, and now business owner. These experiences, along with my zest for life, natural curiosity, love of research and knowledge of Sydney all led to me starting Sydney Concierge.