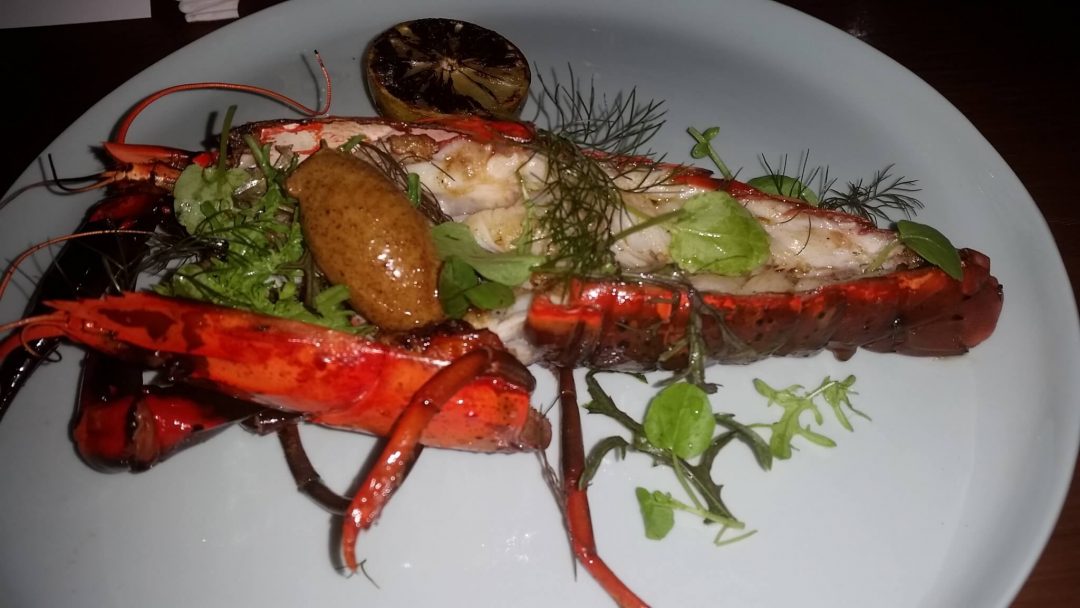 The evening was off to a great start; with their entire cocktail menu on offer, many of which have an Australian twist. I started with a Rye Society which was delicious, before trying Fig Trouble in Little Cynar which felt like it would put hairs on your chest and was a bit bitter for me. Having tried such a ‘manly’ drink, I picked up a pink cocktail which looked very girly. Unfortunately, the pink in The Roots Manuka was caused by the beetroot, not raspberry. I’m not a huge fan of beetroot, so thought I would try a different Australianised cocktail instead, Ginderella with Smoked pumpkin Tanqueray gin, natural yoghurt, lemon, dry vermouth and cinders. Unfortunately, I could not really taste the pumpkin (the yoghurt was the main flavour), but it is was lovely nonetheless. Finally, I had my favourite cocktail of the evening; Hipster Breakfast with Banana bread infused rum, cold drip coffee, salt buttermilk syrup and Fernet-Branca. I wish I had had the chance to ty the Vegemiteini – apparently it is like a dirty martini, but it comes with a side of Vegemite shard which pairs beautifully with the drink – but by then it was time to sit down for dinner. Never mind, I need an excuse to go back soon.

Dinner consisted of a 7-course menu created specifically for that evening, with matching wines. The first course was Squid ink crackers with trout roe, which I loved and could have happily eaten all night. The crackers were really moreish and felt like a healthy version of prawn crackers. They were paired with Sutton Grange Sparkling Rose from Bendigo, which was light and refreshing.

Thirdly, we had Vine tomato with Vannella burrata, 25-year aged balsamic vinegar and tomato seasoning, paired with KT ‘Pazza’ Water Vale Riesling from Clare Valley. Personally, this was my least favourite dish as I am not a fan of tomatoes or straight Rieslings. It’s a shame as the dish looked fantastic, and I loved how they had turned a traditional Caprese Salad, by stuffing the burrata inside the tomato.

Next was a surprisingly different dish; Slow cooked organic’s hen’s egg with sweetcorn, seaweed, parmesan, sage and chicken scratchings, paired with one of the above whites of our choosing. I chose the first wine and loved this dish, despite not being a huge fan of sweetcorn. It was like a huge eggy soup, and much better than that sounds.

The next dish is pictured and was my second favourite; Roast marron tail with curry butter, burnt lime and leaf salad, again paired with the white of our choosing. After seeing the Australianised cocktails, it was nice as a British expat to see Jason go back to his own British roots by adding curry butter to this Australian seafood. Certainly I am sure it would be hard to source marron as large as this in the UK.

The last savoury dish was also very English; Lamb rack and braised shoulder with cauliflower cous cous and Sunday lunch gravy. It was not as adventurous as some of his other dishes, but was comfort food as its finest, and sometimes this is all you want. As the name of the dish implies, it would make the perfect Sunday lunch. The lamb was paired with Mount McLeod Pinot Noir from Gippsland, which was beautiful and a bargain at under $50 on their menu.

Last but by no means least, was dessert and my favourite dish of the evening; Yoghurt mousse with lemon curd, malt meringue and basil sorbet, paired with Bream Creek Late Picked Schonberger in Marion Bay, Tasmania. The basil sorbet had a meringue base and was surrounded by the yoghurt mousse. It was quite possibly the most surprisingly fresh and delicious combination I have ever tasted. The gentleman sitting next to me at dinner said a good test for dessert is whether after 6 previous dishes, you can a) finish the dessert and b) would go back for seconds if you could. I was pretty full by this point, so was relieved that seconds were not on offer, as I would have found it very hard to refuse.

In summary, this is deservedly the hottest restaurant in Sydney right now, located in the hottest new hotel, in the hottest suburb. It is fine dining with a relaxed atmosphere, which for me sums up the Sydney dining scene perfectly. Quick book a table, before the rest of Sydney finds out! Oh and one more tip, read the cocktail menu before you grab the first pretty one you see.