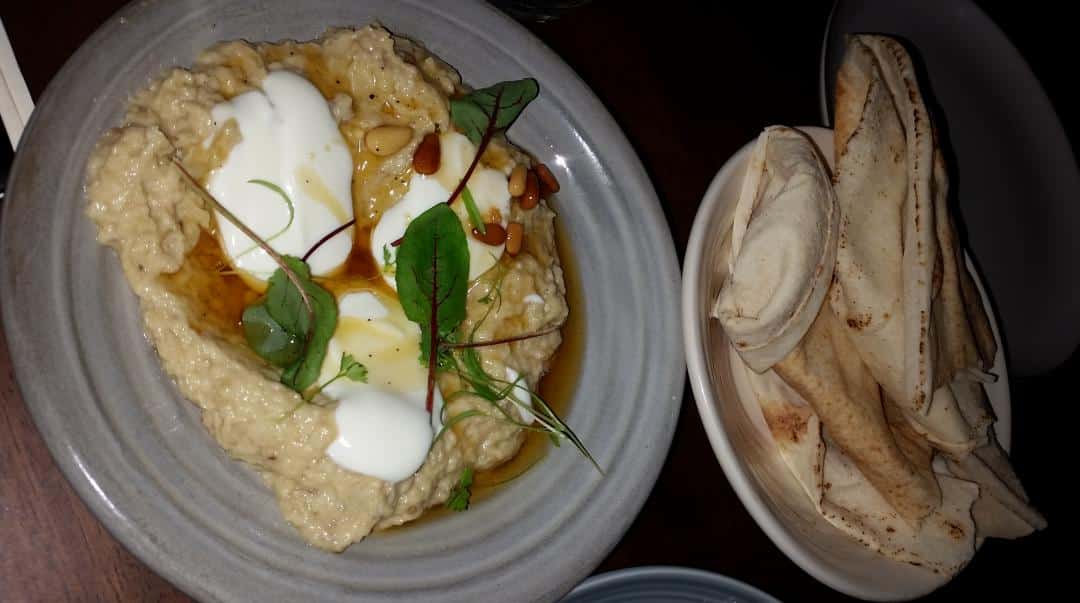 Expectations were high last Friday evening. This is Stuart McGill’s first restaurant, former Sous Chef at Tetsuya’s, though he is perhaps more famous recently for the brilliant Eat Art Truck. Thievery did not disappoint. Firstly, they were were incredibly helpful when at the last minute (5pm) I asked if they could possibly move our 8.30pm booking forwards. They did, to 7.15pm, which was perfect.

Upon arrival, they showed us to our table and took drink orders soon after. They also took the time to explain the menu to us and advised 4-5 dishes to share between 2. We ordered 4 savoury dishes (Baba Ghanoush, Fried Chickpeas, Lebanese Fried Chicken and Slow Roast Lamb Kebabs) and a dessert (Icecream Kebab), which was plenty. I don’t normally like Baba Ghanoush (pictured with flatbead), but this was delicious. The Fried Chickpeas were also yummy, although a little spicy for me.

The service was extremely efficient; it’s hard to believe they have only been open for a couple of weeks. Finished plates were cleared almost immediately and tables were reset within minutes. We finished and paid just over an hour after we arrived, but at no point did we feel rushed. No matter what time you arrive, they allow each table 2 hours to dine.

I believe it is reasonably priced too, especially if you compare it to similar trendy restaurants in the Inner West. We paid just $110 for 2 people.

In trying to present a balanced review, I have just one small criticism, although it probably says more about my age that anything…the music was too loud. My partner and I could hear each other…just. After awhile though, I could not hear myself think.

My only other My tip: Book at least 2-3 days on advance – we turned up about 7.30pm on a Thursday night a week earlier and couldn’t get a table. Having said that, there is an outdoors balcony area at the front which overlooks Glebe Point Road with bar style seating.

After a great dinner at Thievery last week, we decided to try breakfast there yesterday. We were running late, so did not arrive until 10.45am. They did not open until 11am, so we waited patiently in the cold for 15 minutes with high hopes. Sadly, it was not good. Firstly, they only open downstairs for brunch, so we had to sit on bar stools which were quite uncomfortable. As it is a lebanese restaurant, they do not sell flat whites or lattes, just Ibriki black coffee which was presented in a small glass and tasted very bitter. The irony was that all of the staff had take-away flat whites for elsewhere! Likewise, they do not sell English Breakfast tea. Mainly they just have herbals teas. I ordered a black tea, but it was unlike any black tea I have had before and very weak. The food seemed to take awhile to arrive, certainly longer than dinner did there last week, and was disappointing. If I have not put you off completely, in addition to the brunch menu on their website, they also serve the ‘share’ dishes. The best part was that the music was not as loud as it was at dinner. Please note, they only serve brunch from 11am-3pm on Saturdays.