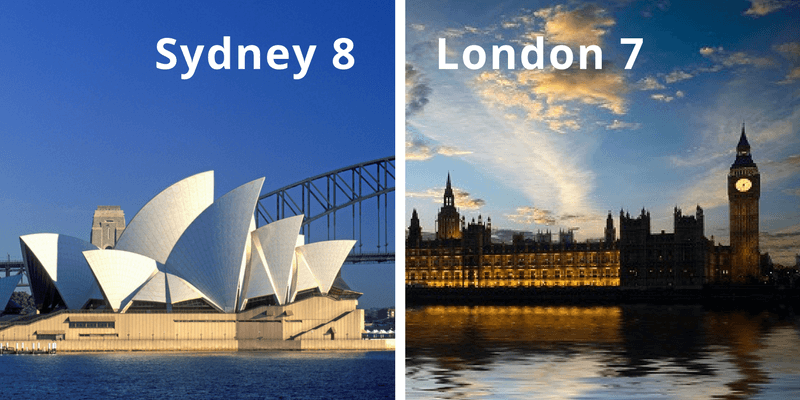 A couple of months ago, I visited family and friends in the UK. We travelled around England, exploring 7 counties, but spent the majority of our time in London.

Some of you will know that I lived in London for 6 years, and it will always hold a special place in my heart. In fact, after Sydney, it is my second favourite city in the world! Having lived in Sydney for over 10 years now, as a permanent resident (and 8 of those as an Australian citizen),  I feel myself feeling like more of a tourist when I visit London these days, so I thought I would try to look at both cities objectively, to see how they compare….admittedly, these are not the points which cities are usually rated on. They are simply the things that struck me during my visit.

This was the second time I have visited London in summer, since moving to Sydney, but this time, the lack of (decent) air con really struck me. The weather was also nice when I went to the London 2012 Olympics, but this time seemed much worse. Perhaps I am just getting older! Apparently, the shops, restaurants, buses and even some tubes had air conditioning, but I could hardly feel a thing. Admittedly, London needs it for about as long as Sydney needs the next point.

We didn’t get to try London’s central heating during this visit, as summer was in full bloom (see next point), but having lived in the UK for over 30 years, I can attest to its brilliance. Sadly, Sydney is not equipped for the cold, and I find it is often colder inside than out! Admittedly, this cold spell doesn’t last as long as London’s, but still, it would have been nice before we went to London and when we got home.

3. Weather for the 2 weeks we were in London

We were incredibly lucky during our visit. Out of days in London, it only rained on day 1. The majority of the other days were warm and sunny, and I even got sunburnt on our penultimate day!

However, people do not visit London for the weather, and although Sydney gets more rainfall each year than London, it also gets a lot more sunshine.

Sydney is trying, what with the light rail expansion (due to be completed in 2018 and operating fully by 2019!), but London is streaks ahead here. In London, if you have to wait 5 minutes for a tube, it is seen as a long time. If only Sydney trains were as frequent. London also introduced 24-hour tubes on weekends, so you can catch one at any time from Friday morning until Sunday night.

As mentioned above, the tube and buses in London seemed to have no, or very little, air conditioning. I expected this on the tube, as it is the oldest underground train system in the world and also one of the deepest. However, my expectations for buses were high. Surely, it should be as easy to cool a bus in London, as it is in Sydney?

Sydney has been trying with this category lately too. Over the last few years, a plethora of UK, European and US shops have opened here. Sadly, Marks and Spencers as still not arrived and some say they have cancelled their initial plans. London has always been better for shopping though, and I found its prices much more competitive, despite its VAT being 20%! Being able to claim back much of the VAT at Heathrow certainly helped take the sting out of my credit card too.

Despite London’s amazing shopping scene, I was gobsmacked to discover that most stores do not open until 12pm on Sundays, due to retail trading laws. There was a couple of times were we literally stood outside waiting for a shop to open. Now, I am not a morning person, so that would never happen in Sydney. Plus, stores generally open at 10am here. I guess when you are in one of the greatest shopping meccas in the world, plus you have a million people to visit, every minute counts.

Similarly to above, we were surprised to find that many cafes do not start serving breakfast until about 10am. When you land on a Friday morning and have jet lag, this is far too late. In contrast, one of my favourite cafes in Sydney opens at 6.30am on Saturdays and 7.30am on Sundays.

On our last day in London, we went to see West Ham FC play their first game at their new home ground (the Olympic Stadium) v Juventus FC. We arrived well in advance and so queued up at the bar before the game started. After queuing for at least half an hour, we bought ourselves a beer, as well as drinks for my parents, and walked towards our seats – only to be told that alcohol could not be taken to the seats! This was about 15 minutes before kick off, so we had to drink the beers very quickly and leave the other, over-priced ones, in the bin. We managed to sit down just as the whistle blew, but it was quite frustrating. I realise they have had alcohol-fuelled problems at football games in the UK, but I’m not sure why they don’t adopt Sydney’s stance and allow low alcohol or mid-strength.

11. Atmosphere at the football

Once we sat down to enjoy the game, I realised that Australia doesn’t have the same atmosphere as football games in the UK. I realised how much I had missed the chanting, the songs and the anthems. We are starting to get some of this in Sydney, especially at football games, but it’s not the same somehow. Sadly, this passion for football in the UK is sometimes followed by more violence, though luckily I have never seen any problems myself. And Western Sydney Wanderer fans (perhaps some of the most passionate in the A-League) have been getting themselves a reputation lately. I am going to the opening game at ANZ this Saturday, between the Wanderers and Sydney FC, so it will be interesting to see what happens, especially now the Wanderers have moved to a much larger home ground.

Being British and spending the majority of my life in the UK, I am a tea fanatic. To be honest, I didn’t really start drinking coffee properly until about 3 years ago. Tea is something the English and London excels at of course. But, according to my Australian partner, coffee is not. I cannot pretend that I know an awful lot about coffee and am certainly not a coffee snob, but he has a point. Having said that, London has come on leaps and bounds over the last few years. Flat Whites are now sold pretty much everywhere, and a cafe called Flat White in Soho started the trend of antipodean coffee shops back in 2005. Although coffee is improving in London, it seems this comes at a price. A flat white at an antipodean-run cafe will cost you about £2.80, and at once cafe near London Bridge we paid £3.50! In comparison, a coffee in Sydney of better quality will cost about $3.50/$4.

You could not split the cities on this category. Whilst Sydney has more natural beauty with its harbour and beaches, London’s skyline is magnificent. I love the fact there are ultra modern, cutting edge, buildings sitting literally next door to ones a thousand years old. On this trip, the best views we saw in London were from Vista (the rooftop terrace at The Trafalgar Hotel), Skygarden (level 35 at 20 Fenchurch St, aka the Walkie Talkie) and Level 10 of the new Tate Modern Switch House. All of which are free, though bookings are needed for Skygarden and Vista has £5 cover charge and minimum spend after 4pm.

In Sydney, I take an anti-histamine almost 365 days a year for my allergies. Some days, I feel like I have the flu, but then realise it is just my allergies. In Sydney, I only have to look at a cat it seems and I start sneezing. Whereas in London, we stayed at a friend’s flat near London Bridge and slept in a room 2 cats often slept. There was cat hair everywhere, yet I did not sneeze once. Very strange.

So, overall, Sydney scored 8 out of 14 and London scored 7. I knew there was a reason they are my favourite cities in the world for a reason! Although, London came a close second, it was hard to leave and say goodbye to everyone (again). Knowing Sydney was at the other end of a very long flight helped soften the blow though.

Please let us know what you think in the comments below? Do you prefer Sydney or London?