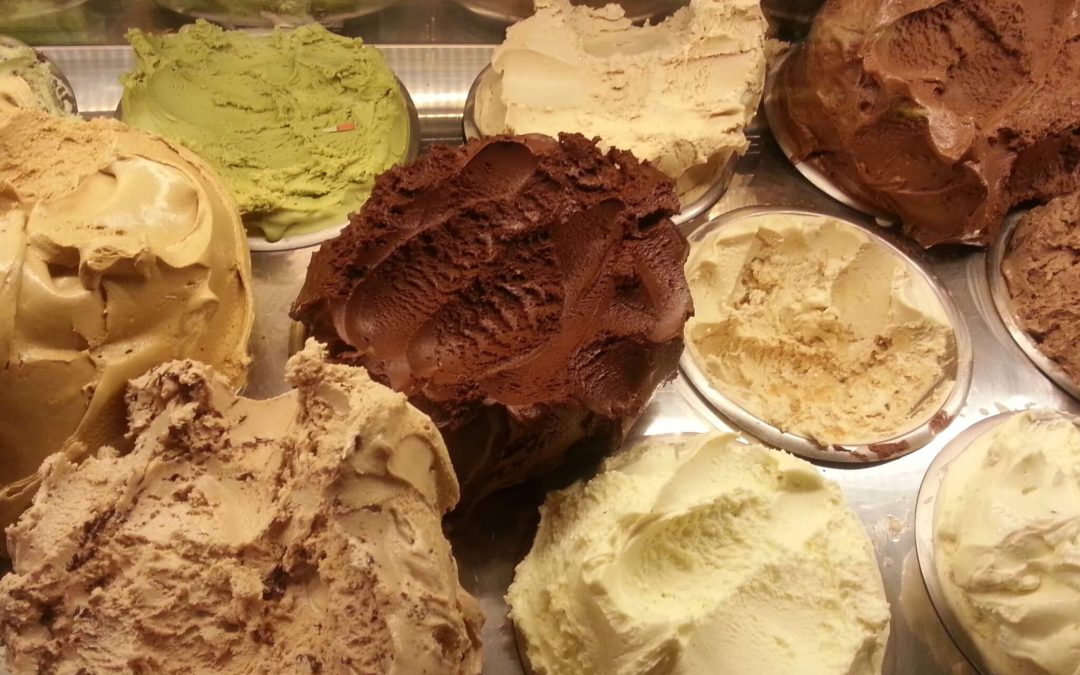 This was a really difficult list to put together, as there are so many great gelato places in Sydney these days. It was a hard decision choosing the top 10, but someone has to do it! And of course, doing the ‘research’ wasn’t too bad either. In no particular order, here they are…

1. Gelato Messina
Not only is this my personal favourite, but it is also the best gelato in Australia according to SMH Good Food Guide, and they have the most branches (7 stores in Sydney, 3 in Melbourne, 1 in Gold Coast and even 1 in Las Vegas!). They also offer gelato classes, have a dessert bar in Darlinghurst, amazing gelato cakes and offer gelato cart hire for those special occasions. Oh, and thanks to Suppertime, they even deliver now! My personal favourite flavour was sadly a limited edition one; Cremino (salted caramel gelato with gianduia fudge, fresh meringue and amaretti biscuits).

2. N2 Extreme Gelato
N2 Extreme has also been successful enough to open 2 stores in both Sydney and Melbourne. They use liquid nitrogen to make exceptionally smooth gelato fresh to order, and only use the freshest, local ingredients. Famous for their crazy concoctions and syringes filled with delicious sauces, they can often be found at food festivals. If you are feeling creative enough, you can even submit a flavour idea on their website. I love the fact that they advise you just have 1 flavour, as let’s be honest, it’s easy to get carried away.

3. Cow & Moon
Cow & Moon can be found in Enmore, and their Almond Affogato (Madagascan vanilla combined with caramelised Italian almonds and single origin coffee) flavour took the Gelato World Tour title in Rimini, yes in Italy, the home of gelato. They also just won the 2016 Australian Gelato Grand Champion at the Australian Grand Dairy Awards and for Australia Day this year, they created  Lamington & Anzac Biscuit gelato. Shame I don’t like coconut.

4. Riva Reno
RivaReno Gelato had a great start in life; it started in Milan in 2005. They now have many stores throughout Italy and the rest of Europe. It says a lot about Sydneysider’s obsession with gelato that their first store outside of Europe was in Darlinghurst. It remains their only branch in Australia. Their most popular flavour is the ‘Alice’ which consists of Mascarpone, a splash of Marsala ‘Vergine Soleras’ (an Italian port wine) and with a delicious topping of melted giandiuia (chocolate and hazelnut). They stand out above the competition, as they only make a small quantity of each flavour at a time, to ensure its freshness. They are also scientific about it all, storing their gelato in Pozzetti, which ensures the perfect temperature.Time Out called it the best gelato in Sydney in 2013.

5. Cremeria de Luca
Cremeria de Luca in Five Dock has been open for almost 3 years, but the owner, Luigi de Luca, opened his first gelateria in Sicily in 1985. They sell so much more than gelato these days (refreshing granitas, Italian hot chocolate which is more like a warm chocolate pudding, other Sicilian delights), but most people come for their famous Gelato Burger (2 scoops of any flavour gelato, a dollop of whipped cream and nutella sandwiched between a brioche bun. It’s a bit messy, but the best things in life often are. They are closed on Mondays, but open late the rest of the week.

6. Pompei’s
They are located in Bondi, just a couple of minutes’ walk from the beach. They are open long hours and are so much more than a gelato joint. They are open for breakfast, lunch and dinner and are licensed if you fancy a glass of Sauv Blanc with your gelato. Pompei’s are a Bondi institution, and the perfect place to head to after a swim.

7. Aqua S
Aqua S is different to most of the ice cream stores in Sydney, as they sell soft serve, sea salt soft serve to be precise. It started in Japan and they opened a branch in Sydney CBD last year. They now have 4 branches throughout Sydney. They keep it pretty basic at Aqua S, with just 3 flavours at a time – Sea Salt of course, plus 2 which change every fortnight. Despite the lack of flavours, they are still highly instagrammable, especially once you add the fairy floss, popcorn and marshmallow.

8. Anita Gelato
Anita Gelato can be found at Central Park, Chippendale. And I first found Anita when I went to Vivid Sydney there last year. They had a slightly unusual start, in Tel Aviv; not the first place you usually think of when you think of gelato. They still have 2 stores there, as well as the one in Sydney. And with over 150 flavours, they certainly have something for everyone. They even have sugar-free, vegan chocolate gelato if you are looking for a healthier option.

9. Gelato Franco
The Franco in question at Gelato Franco is Franco Riservato, who started his career at Bar Italian in Leichhardt over 2 decades ago. He now runs his own joint in Marrickville. They have 15 flavours to choose from, including 10 regulars. Their most popular is the Zabaglione, with marsala liqueur and marsala-soaked sponge. If for some strange reason, you get sick of their gelato, his mum also makes Italian cakes and biscotti there. According to their Facebook page, they also offer free hugs.

10. 3 Mama Chefs
This is ice cream with a difference. Specifically, ice cream scrolls. Predominantly, 3 Mama Chefs is a Thai restaurant in Thai Town, although their ice cream scrolls are becoming the main attraction these days. There are 2 options – small for $7 (with 2 mix ins) or large for $8 (with 3 mix ins). I choose the large, as I could not narrow it down to just 2 mix-ins (I ordered chocolate ice cream with crunchy peanut butter, brownie and marshmallow). I couldn’t even begin to do justice to the amazing way they make the ice cream in front of you, so check out this video and this one. Essentially, they mix it all up (like Cold Rock, but also very different), spread it out and then roll it up. The scrolls have a doughy texture and are a little chewy. They are very hard to describe though, so why not go down there and try one for yourself.

There are so many others which deserve a mention, such as Bar Italia, Anita Gelato and Hakiki Turkish Ice Cream. Good Time Soft Serve has also just opened up last night in Potts Point and it sounds like a serious contender with its weird and wonderful flavours (e.g. Smashing Pumpkin – salted caramel soft serve with chunks of sweet pumpkin, salted-peanut praline, caramel praline and a protruding shard of candied bacon). They sold out before closing time on their first night, it’s ran by ex-Nomad chef and Christine Mansfield is helping out, so is sure to be a winner. I will update this list after my visit there.