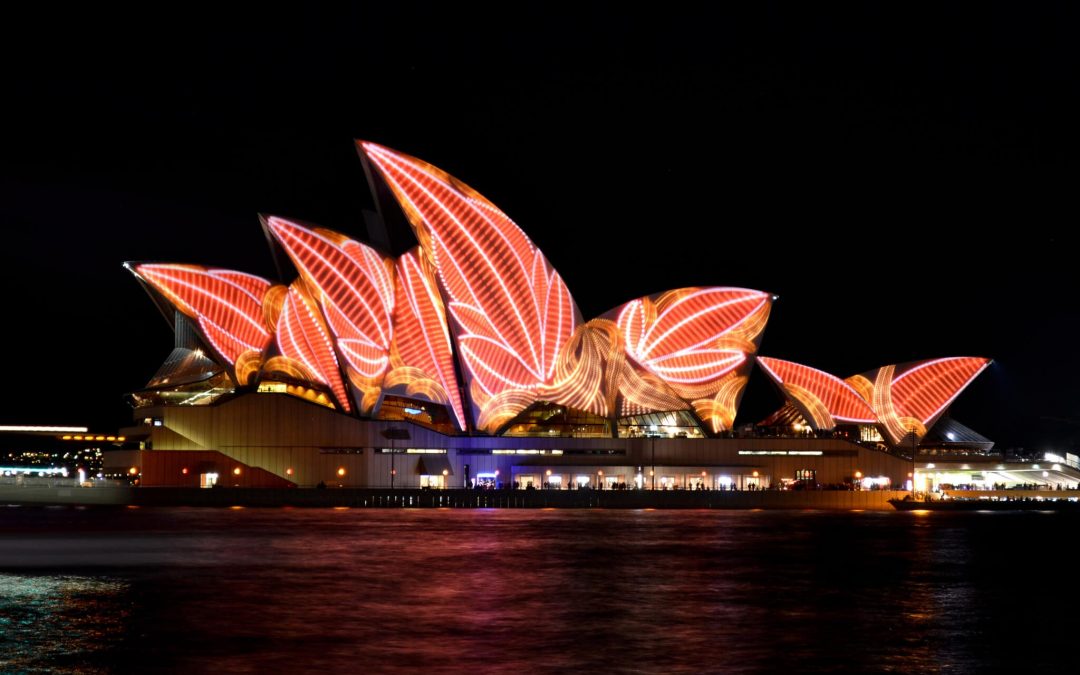 Unless you have been living under a rock, you will know that Vivid Sydney starts tomorrow (Friday 26th May) and runs until Saturday 17th June. But do you know where to start, or are you feeling overwhelmed as Vivid becomes bigger and better every year. It extended last year to over 3 weeks and more than 2.3 million people went to Vivid (at least once) last year, so it pays to be prepared! For the first time, Barangaroo South and Kings Cross have been added as a precinct. Other precincts are: Campbell Cove (near the Park Hyatt), Chatswood, Martin Place, The Rocks, Darling Harbour, the City and surrounds, The Royal Botanic Gardens, Taronga Zoo and the Harbour. Cost varies from free upwards.

Here are our Top 10, as well as quite a few notable mentions (they are all on for the entire duration of the festival unless specified otherwise):

2. Sydney Restaurant Group is offering a progressive dinner like no other. Enjoy entrée and pasta at Ripples Milsons Point, before doing a cruise to Ripples Chowder Bay for main and dessert. Their water taxis will then take you back to Milsons Point. Can also be enjoyed in reverse. Cost: $195 including 4 courses, matched wines and Vivid cruise.

3. The Silent Disco Ice Skating Festival is back at Central Park (from 26th May until 6th June). Skating will be open 10am to 8pm daily, and the silent disco is from 4pm. NB – This is not a ticketed event and will be on a first come first served basis for each skate session. Cost: free

4. For the second year in a row, Vivid is back at Taronga Zoo. “For the first time, Lights for the Wild will be a fully interactive and immersive event. Become part of the experience and interact with the light sculptures like never before with a state-of-the-art wristband that lets you become a light for the wild.” One of the things I loved the most about this last year, was that it was pretty quiet (especially compared to Circular Quay and the Botanic Gardens). they were no crowds the evening we went, so it was the perfect place for families to enjoy Vivid. We did go the first weekend of Vivid though; I heard it got a lot busier as the word spread. NB – Each night there will be a limited allocation of Blue Pass tickets that include a round trip on Taronga’s Sky Safari cable car. Highly recommended. Cost: $21.95 Adult, $16.95 Child (4-15 years) & Concession. Children under 4 years of age are free.

5. The Sydney Tower Eye is hosting an exclusive after-hours party, 250m above Sydney, surrounded by 360-degree views of the city lights. There will be a different live music line up, every Friday and Saturday night during the festival. NB – Eye Live is an 18+ only event. Cost: $49 including entry.

6. In the same building on 3rd June, 360 Dining is hosting an Alice in Wonderland themed dinner, designed to awaken the senses. “Blending extraordinary gastronomy with theatrical technology, including auditory cues, tactile sensations and visual illusions, this fully immersive dining experience will transport you into the whimsical world of Wonderland in a heartbeat.” You will also enjoy 220-degree views of Vivid. Cost: $195 including cocktail, 6 courses and matching wines.

7. As part of Harbour Lights, cruises and ferries will be adorned with LED lights “and each little vessel becomes part of a coordinated display that moves across the colour spectrum as they move across the harbour”. Cost: varies. Contact us for discounts on Vivid Cruises.

8. Organic Vibrations on the facade of the MCA (Museum of Contemporary Art) “is a collaboration between Julia Gorman, an Australian artist whose work is currently on display in the MCA’s Inside/Out Room, and Paris-based production company, Danny Rose. Together, they create a single, coherent artwork from the constant morphing and mutation of a series of images”. Not only will it be lit up in all its glory, but the MCA will also be open until 9pm Wednesday–Sundays during Vivid. The MCA Cafe on Level 4 has spectacular views of the Opera House, Bridge and harbour.  So, you can grab a quick snack there to keep you going on your Vivid walk, or you could stay all evening and enjoy the views whilst avoiding the crowds. The pop-up Graze Bar will also be open outside on ground level, offering the perfect winter comfort food and drinks (think mulled cider with gin and cinnamon, spicy hot chocolate, hot dumplings and lamb sausage rolls etc).

9. Supper Club at Intercontinental Sydney is probably my favourite rooftop bar (there are quite a few to choose from). During Vivid, they are offering three bespoke mini cocktails for $50. The stunning views, from level 32, are free! NB – this promotion is only available from 8pm till 9:30pm and bookings are essential. Cost: $50. Intercontinental Sydney is also hosting a laneway dinner with a cocktail in the Supper Club afterwards. NB – some dates have sold out already. Contact us for availability. Cost $169.

10. Saving the best til last…the Lighting of the Sails is probably the most popular part of Vivid each year, and quite rightly so. If you are unable to visit Sydney during Vivid, the Opera House Facebook page will stream the full broadcast of  Lighting the Sails each evening. This year, expect to see images projected from ‘beneath the harbour line and beyond the jungle walls’. Cost: free.

NB – if you take your children, you can get them a free wristband from Vivid volunteers at Darling Harbour, West Circular Quay and Customs House. Write your phone number on the wristband and tell your children to find a volunteer if they lose you.

PS – Contact us for more suggestions, including which cruises, bars, restaurants and parks have the best Vivid views.