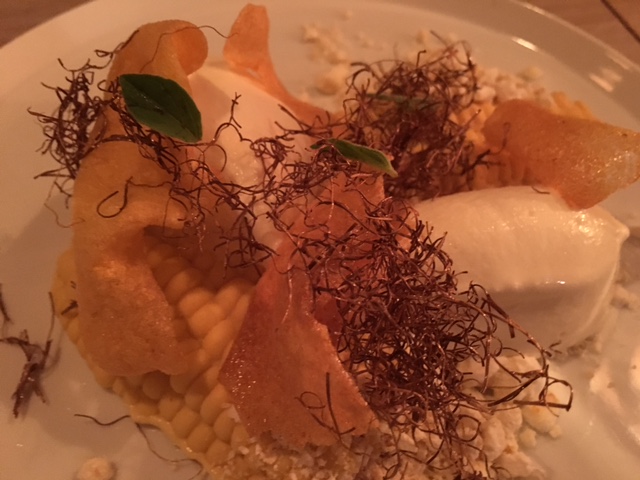 Luckily, I had booked a backup restaurant, and luckily that backup turned out to be just as good as Dinner by Heston in London. That backup was Lume in South Melbourne. After I made my booking, they were awarded a Chef’s Hat in The Age Good Food Awards and they definitely deserve it. The hat was not a huge surprise though, as the chefs Shaun Quade and John-Paul Fiechtner have Quay, Royal Mail and and Paris’s Le Chateaubriand on their resumes.

They offer a degustation at the back of the restaurant, or a la carte in the front room. We chose the latter option. As we were a large group (11 of us) we had the Chef’s Selection, which at $85 per person is great value. It included lots of dishes to share, such as Olives, Ricotta with honey, Duck liver parfait with rhubarb, Anchovies dry salted then marinated in lemon and herbs, Charcuterie (they bought extra for us when we hinted 2 servings might not be enough), Smoked trout with pancetta and kale (the kale was so good that even I liked it!), Pumpkin with vadouvan (a delicious spice) and pepita seeds, Roasted parsnips, Fire roasted lamb (they served us 3 large ones of these which was too much really. It was delicious, but we were full after all of the other dishes), and Corn catalana with caramel, popcorn ice cream, chocolate mousse and marmalade for dessert (pictured)!

Please note, that dessert is optional, so you can pay $75 if you decide not to include that. But it is worth it, for the chocolate mousse alone.

The service was exemplary. The bar staff even gave my cousin and another friend who arrived an hour early, free wine tastings until the rest of the group arrived. They also shouted us the desserts as it was my birthday, which I thought was a very generous and thoughtful touch.

The only small hiccup was that they charged us for the wrong wines, which were more expensive than those we had chosen ($120 instead of $85 and $95 instead of $75). We worked out that the extra charge was evened out by the complimentary desserts, and the food and service was otherwise perfect, so we decided not to say anything.

In summary, I will dine at Dinner by Heston at some point next year, but it will have a lot to live upto now!